The island of Brava today is home to two parishes or municipalities, Sao Joao Baptista and Nossa Senhora do Monte, each with a church of the same name. Prior to 1910, vital records were in the form of church baptism, marriage and obituary records. In the past 4 years I have probably searched to thousands upon thousands of individual records from both parishes and traced my tree to the 1700’s.

The marriage records available start around 1806 for the parish of Sao Joao Baptista. What I found is a bit of a mystery – could there have been another forgotten parish? Take a look at this record for the marriage of Boaventura de Barros and Ingracia de Pina in 1808. 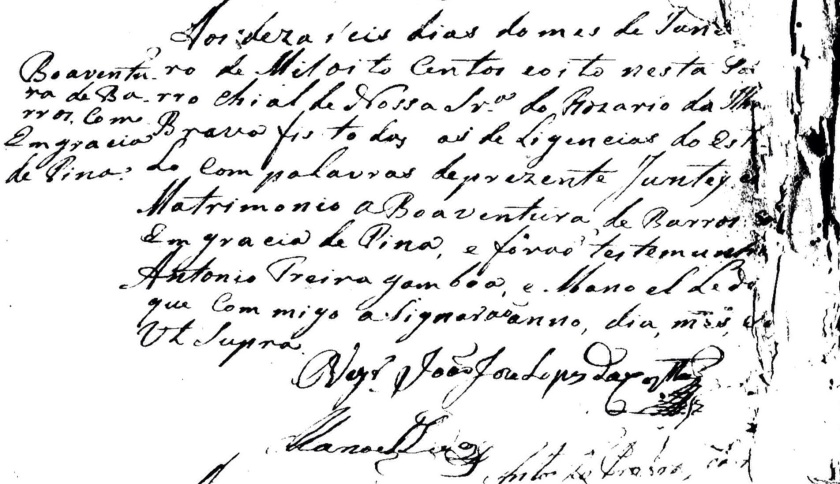 On the third line it says “parochial Nossa Senhora do Rosario da ilha Brava” or parish of Our Lady of the Rosary of the island of Brava?!?! I have seen records referring to chapels within a parish but this record clearly states it is a parish. These records continue in this way until about 1811. When I inquired about this to reps at national Archives of Cape Verde they said it may have been settled by people who came from a parish with the same name on a different island.

There exists parishes of Nossa Senhora do Monte on the islands of São Nicolão and Santo Antão but no one I have spoken to, in particular, older relatives have ever heard of there being one on Brava. The parish of Sao Joao Baptista probably came into existence as the island went from being known as São João to Brava in the 1700’s. In the writings of Captain John Roberts (written by William Defoe) in 1726 he refers to it as St. John. Nossa Senhora do Monte was established a hundred years later in 1826 but the church here was not completed until after 1841. I know I have ancestors born prior to 1826 who were naturals of the area of Nossa Senhora Do Monte. Could it be that they had established their own parish or chapel?

Sometime after 1781, Galvao, a young man from the island of Santo Antao, Cape Verde, ran away from slavery to Lisbon where he worked for a member of the royal court. This “fidalgo” or nobleman, happened to ask him one day where he came from. Galvao, innocently, told him of the conditions he had escaped from in Santo Antão. Presumably, he would have told him of hunger, poverty, and the brutality of enslavement on the island. Immediately, the fidalgo made his way to the palace of Queen Isabel I, who had succeeded her father, King Jose I upon his death. He told her of the conditions on the island of Santo Antao and the enslaved people who he knew belonged to the Duke of Arveiro, Dom Jose de Mascarenhas.

Queen Isabel had for some time been attempting to correct all the sins of her father, King Jose I and his cohort, Sebastiao Carvalho, the Marquis do Pombal. Carvalho served in the position equivalent to the Prime Minister for the King and began to amass enough power to get rid of any elements of the Portuguese kingdom he saw as a threat. This included diminishing the power of the aristocratic families of the time and the Jesuit priests. Carvalho was successful in exiling the priests from Portugal while taking the power and influence of such families as the Tavora’s and Arveiro’s. The Marquis was also effective in leading Portugal after one of its worst natural disasters, the Lisbon earthquake of 1755. His loyalty was to the King and he would destroy anyone who would threaten his sovereignty. It wasn’t very long before the King and Marquis created enemies within the kingdom.

King Jose was known to have kept a mistress, who happened to be the wife of the Marquis Dom Luiz Bernardo, a member of the Tavora family. The Marquis was said to have sought he help of the Jesuits and the Duke of Arveiro to kill King Jose. The conspiracy to kill the king included his parents and younger brother, Jose Maria, as well. The attempt to kill the King while riding back from a rendezvous with his mistress failed and all the conspirators and their families were arrested and condemned to death. The Duke of Arveiro and most members of the Tavora family were killed in the most gruesome ways, possibly to instill fear among and of the King’s other enemies, while others managed to escape Portugal to places like Cape Verde. Salt was poured on the lands belonging to these families so that nothing would ever grow there again.

When Isabel took the throne in 1777, one of the first things she did was to recall the Jesuits and appointed Dom Jose Maria de Mello, the Confessor of the Royal Conscience. By 1781, she had declared the innocence of all the individuals, living or dead, involved in the conspiracy to kill the King. Shortly after, the Queen went insane.

The account of Galvao, says that the nobleman he worked for “sought the conscience” of the Queen. It may have been Dom Jose Maria de Mello, himself, who had the ear of the Queen as the Royal Confessor. When the queen learned of Galvao and enslaved people in Santo Antao, owned by the Duke of Arveiro, she immediately declared their freedom. Galvao, who had unknowingly had a hand in the freedom of hundreds of people, returned to Santo Antao and his family a free man.