I came across an interesting passage in a book called “Corografia Cabo-Verdiana, ou Descripcão Geografico-Historica” (Chelmecki, 1841) where the author, very matter of factly, stated that there was a tradition in Cape Verde that the island of Santiago was inhabited by Jalofs (Wolof) at the time of its discovery. Using the word “discover” usually implies “previously unknown”. But the islands were referred to by ancient writers, including Ptolomy, as Hesperedes or Gorgades. Ancient maps depict the island group off the coast of Africa well before the traditional “discovery” date of 1460 (even this date is debatable) by Italians under the Portuguese flag… But I’ll save that argument for another day. So it seems to me the more accurate description of the Portuguese arrival on the archipelago is “settlement” versus “discovery”.

The history of the Wolof people is said to have begun around the 12th or 13th centuries, when they migrated west to present day Senegal from Mali after the fall of the Ghanaian Empire in the 11th century. Their oral histories tell of their Fulbe ethnic origins. The distance between present day Mali and Senegal is roughly 700 miles. The distance between the coast of Senegal and Santiago is less than 405 miles. And we are to believe that they could travel over 700 miles by land but not 400 miles by sea? The volcano in Fogo is an historically active volcano with periodic eruptions. The eruption, smoke and ash would have reached the coast of West Africa. Yet we are to believe no one knew of their existence? Except for the Arabs who are said to have traveled thousands of miles to procure salt from the island of Sal. And the Ancient Greeks and Phoenicians traveled thousands of miles, and who wrote about visiting these islands and told stories of the “women of Gorgades” (this is also supposed to have been the home of Medusa).
The Chinese may have even visited the island of Santo Antão and left writing depicting their travels. 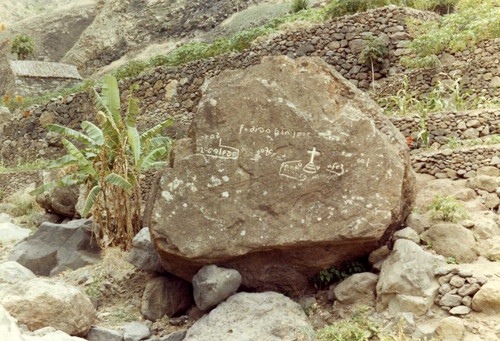 But somehow, the idea that people from the African continent traveling and settling there seems unfathomable according to many contemporary historians. Hmmm…

The Portuguese dealt with many insurrections of enslaved Africans during colonialism. On the island is Santiago it is said that many enslaved people escaped slavery and took refuge inland where the Portuguese didn’t occupy. They became known as “Badius” or vagabonds. It is also said that many “rebelados” or rebellious people were spread around to the other islands to lessen the danger of further insurrections. Chelmecki mentions that prior to the volcanic eruption of 1680 when masses of people from Fogo fled to Brava, there were about 200 descendants of “rebelados” living in Brava. Hmmm…

Aside from brief mentions in a few older books not much proof exists today that these Jalof/Wolof people were inhabitants of Santiago in 1460. Today there are many Cape Verdeans who are proud to call themselves Badius from the interior parts of Santiago. They may be the only group of Cape Verdeans who can claim to have fought colonial rule before our eventual independence in 1975. It would be interesting to have people with ancestry from this island have DNA testing to see if they resemble other Cape Verdeans who, on average, show to be 50/50 African and European. If there are people who show to be 100% African, would that prove that there were native people prior to colonization? Maybe, maybe not. But it would definitely add to the conversation of “what is a Cape Verdean?”.