I can still remember the day when my uncle announced he was naming his new son “Avelino” after his grandfather. I was twelve and I remember imagining the years of torment my new cousin was going to have to endure. Avelino!?! Why?!? Why would my uncle name his only son AVELINO? Why not James? And who was this grandfather? I didn’t know anything about him.

My uncle reminded me of a picture I had seen a thousand times of a young couple in a frame in my grandmother’s living room. 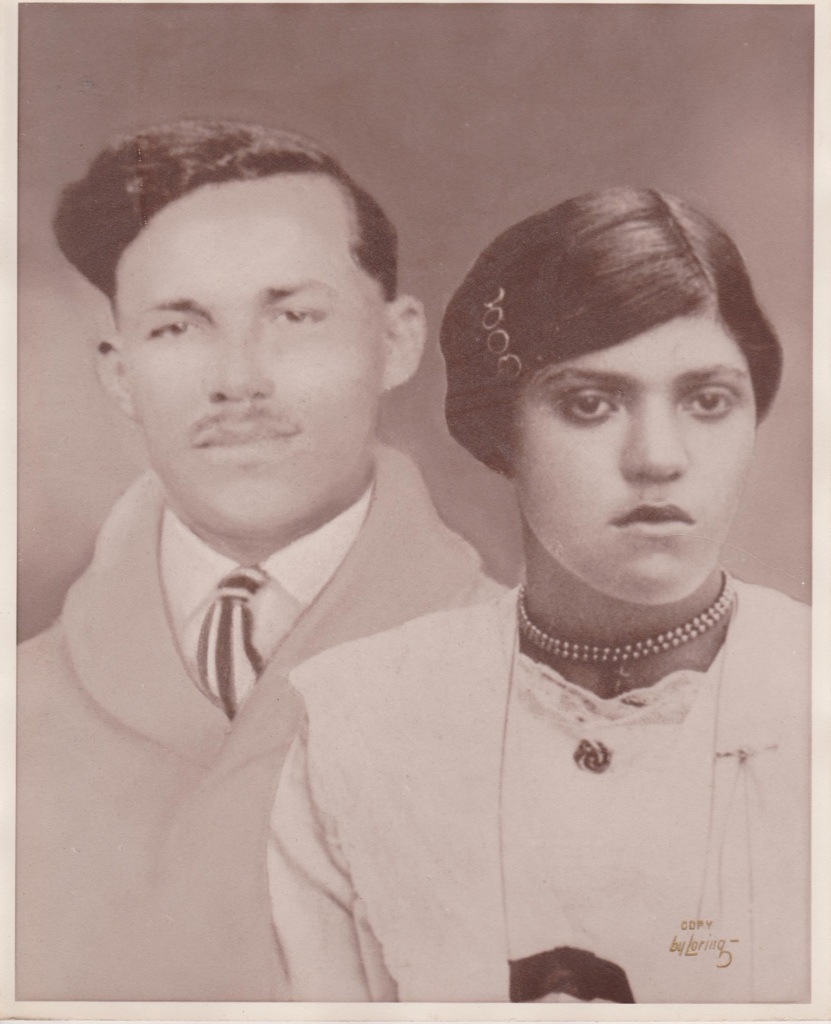 This started my search for Avelino. My great-grandmother, Bibi, didn’t speak much about her husband in all the time I knew her. Except for a few stories here and there, we really didn’t know much about this man who my little cousin was named after, except that Avelino was born in the town of Pai Luis (Father Luis) in the parish of Sao João Baptista in 1900 and died in Waterbury, CT in 1929. 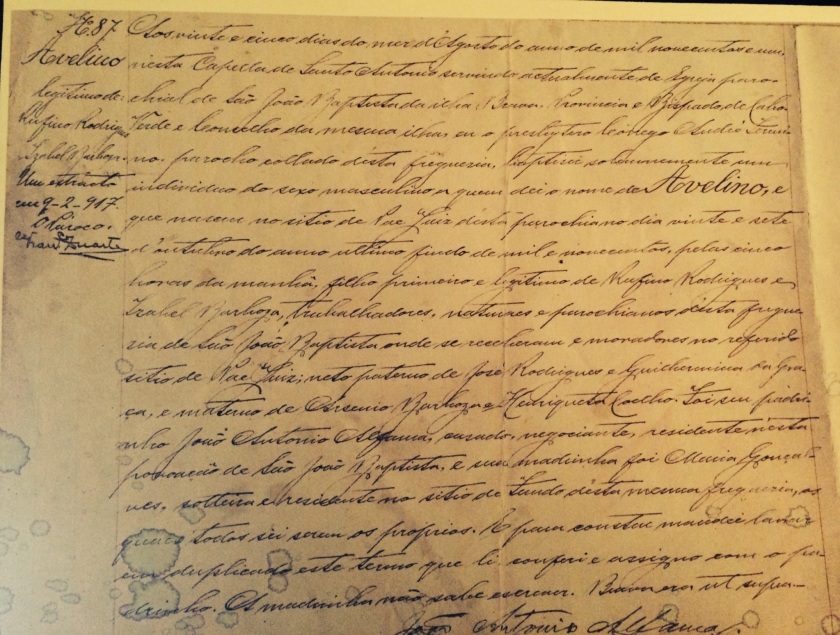 On the 25 of August, 1901, in the chapel of Santo Antonio in the parish of Sao Joao Baptista, a boy named Avelino, born in the city of Pai Luis on October 27, 1900, was baptized. He was the legitimate son of Rufino Rodrigues and Isabel Barboza. He was the paternal grandson of Jose Rodrigues and Guilhermina da Graca and the maternal grandson of Arsenio Barboza and Henriqueta Coelho. His godfather was Joao Antonio Alfama, a married merchant who lived in Povoacão, São João Baptista. His god mother was Maria Goncalves, a single woman from the town of Fundo. His godfather’s signature is at the bottom of the certificate.

On the upper left corner, there’s a notation under my great-great grandparents names. It refers to this record being extracted on 9/2/1917. I believe my great grandfather might have needed his baptism record which would have served as his only means of identity because he was coming to America. My great-great grandfather, Rufino, was a mariner and traveling back and forth between America and Brava. Rufino was living with his brothers, Manuel and Benjamin in Providence where they would have mingled with my great-grandmother’s father, Antonio Coelho. Bibi had told me that their fathers were friends and arranged their marriage.

My great grandfather’s time in America isn’t very clear. He was living in New Britain, CT for a time where he, his brother, Arthur, and cousin, Ernest, ran a store. Toward the end of 1922, after exchanging a few letters and pictures, he arrived in Brava with a white wedding dress complete with a veil and white shoes to marry my great-grandmother. They were married December 31, 1922

Bibi told me the story about the day Avelino left for America on the schooner Volante just a few months after they were married. I can’t recall whether she said the ship left from the port of Furna or Feijão d’Agu but I do remember how she sounded as she described watching the ship disappear over the horizon. It was the last time she saw him.

Immigration of Cape Verdeans to America pretty much came to a halt around this time due to legislation on immigration. Avelino never went back to Brava and Bibi and my grandmother couldn’t come here as easily. In 1924, Avelino and his brother, Arthur, moved from New Britain to Waterbury. In 1925 he started work at the Chase Metal Works, a brass factory in the heart of Waterbury. The money he made from his work was sent to Brava along with building materials to build a home for his family in Cham de Sousa.

I believe it was meant to be a two story, “sobrado” style home. But before the house was finished, Avelino was killed in an accident at the factory.

Avelino Rodick (Rodrigues), 29, of 189 Orange street was almost instantly killed yesterday afternoon at 3:45 o’clock at the Chase Metal Works. Rodick was squirting water from a hose into a revolving tumbling barrel when the hose caught on a nearby barrel and dragged the worker between the barrel and it’s foundation. Rodick was knocked unconscious and died shortly afterward, according to the coroner, John T. Monsani, who investigated.
The man’s left chest was thoroughly crushed. The body was removed to the Lunny funeral parlor on Central Avenue, from which place it will be removed to his home this morning. The funeral will take place Wednesday morning from the home to the Church of the Immaculate Conception, where a mass will be celebrated at 9 o’clock. Burial will be in Calvary cemetery.
Mr Rodick is survived by his wife, Maria; a daughter, Rosinha, his parents, Mr and Mrs Rufino Rodick; a brother, Arthur of Waterbury; a brother and sister at the Cape Verdi islands. He has lived in the city for the past five years and was employed at the Chase plant for four years

Some years ago I had a chance to meet a cousin who was Avelino’s step nephew and lived in the same home when Avelino died. He told me he remembered Avelino leaving for work, as usual, that morning only to return a few minutes later. He watched him go to his room and pick up a small picture of my grandmother, look at it for a while and placed it in his coat pocket. My cousin remembered this because he always felt like my great-grandfather had a feeling that something was going to happen and wanted to see his daughter’s face one more time.

I began searching for Avelino in earnest when I lived for a short time in Waterbury after graduate school in 1998. I spent hours in the library looking for an obituary unsuccessfully. I was living the same city but could never find anything to tell me what happened to him. It wasn’t until ancestry.com came a long a couple of years ago that I found one index entry for Avelino’s grave marker showing that he had died in 1929, something I didn’t actually know before. I contacted the Waterbury clerks office where they explained that records that old were in storage and not as easily accessible and would take a while find. I contacted all the cemeteries in Waterbury that would have had burials around 1929. It took a while but was finally given information on when he was buried but they had no information on why he died. I contacted all the churches that would have been in service at the time only to be told that all the records were transferred to the archdiocese of Hartford. The archivist there told me that they had no records dating back to 1929 for any churches that would have served the Portuguese community of Waterbury. So, on a whim, I contacted the very same library I had spent many hours at nearly 15 years prior. I explained to the librarian what I had been through trying to find my great-grandfather and she immediately found a city directory showing where he worked.

The next day, I received an email with the article above explaining, finally, what happened to Avelino. I cried as I read what had happened to him the day he was killed.

None of Avelino’s direct descendants had ever visited his grave. So on a trip back home from Massachusetts one day, I took a different route back to DC that went right through Waterbury. I drove to Calvary Cemetery to visit Avelino.

On a small hill under a tree I found his simple gravestone. 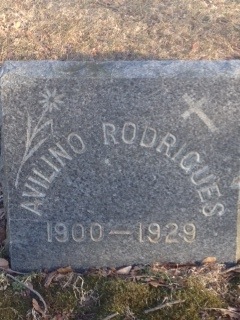 I wish I can go back to the day I complained about my uncle naming my cousin, Avelino. I understand now why he wanted to honor him by passing his name down to his only son.